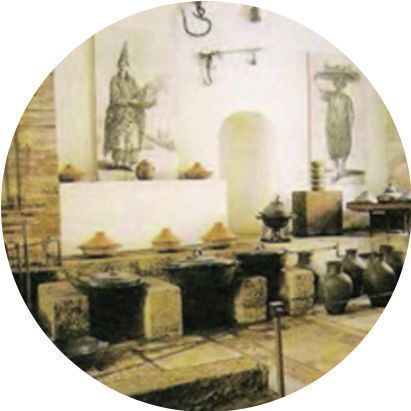 In addition to the cultural history of Ottoman Empire that reigned over many continents, has also a culinary culture with huge corpus that leaves unforgettable tastes on the palates and each dish of which like a feast. The Ottoman Palace Cuisine dish recipes, which is one of the richest cuisines have arrived today. However, evaluating these corpuses just like a dish recipe will be a huge mistake. Some points that stand out in Ottoman Palace Cuisine include several specific issues such as; cooking method, eating habits, table manners.

Kitchen was the crucial part of the palace life. The dished that prepared meticulously prepared were separated as palace cuisine and public cuisine. Meals for the council viziers and harem people were cooked at “Has Kitchen”, for high-level women of palace at “Valide Sultan Kitchen”, for eunuch at “Kızlarağası Kitchen” and for the sultan at “Kushane Kitchen”. Those meals that prepared so meticulously were an activity for socializing for sultan, queen mother and people of council. For that reason; Palace Cuisine has always been a place that seeks innovations in order to make that social activities even better and desire to create delicious meals.

That cuisine had almost 1200 staff that prepare food to approximately 4000 people, daily. The most authorized person of Palace Cuisine was “Üstüdan-ı Matbah-ı Has”. There was journeyman, heads of the division and sagirts under the command of that person who is the most experienced and the wised at the kitchen. Sagirts was the most unexperienced person in the kitchen. Cooks and cook assistants may also be included to that special staff. Expertize was definitely required for the foods that cooked in such giant and gorgeous kitchen. Cooks were separated according to their professions, for that reason. The samples to that tasks may be shown such as; kebap cooker, rice cooker, pastry cooker, diet meal cooker, compote cooker, dessert cooker, dough cooker. That may be deferred from that; having lots of staff in Ottoman Cuisine is not only for show off but also to prove that this culture is how crucial for Ottoman.

These favorite vegetables such as potatoes, tomatoes, fresh pepper, zucchini has spread over time from the new continent to the ancient continents with the discover of America. The biggest mistake about this wide corpus that accepted as true is about; the meat consumption. The people of the palace that did not consume beef as they thought it is tough, also were not very fond of other type of meat as it is considered. One of the biggest reason of that meat was difficult to keep.

When it was time for eating, meals were placed on the big, round trays called “sini”. The sinis were decorated with flowers such as daffodils, hyacinths and carnations to make the tables smell good. Fruits were not consumed as food in the Ottoman at where the fruit consumption was also high. Some dishes were flavored with auxiliary foods such as raisins, apricots, persimmons and chestnuts. Moreover, fruits were also used for making compote, jam, sherbet and pickles.

Although Ottoman Palace Cuisine had renewed itself in every century, it gained its real momentum during the reign of Fatih Sultan Mehmet. There had been great changes in the dishes of Ottoman with the conquest of İstanbul. A giant kitchen was built in Topkapı Palace that was built between 1475-1478 years. This kitchen covering the area of 5250 square meters, draws attention with its numerous domes and chimneys looking at the Marmara Sea. These kitchens were named as “New Palace”.

The other important feature of Fatih Sultan Mehmet period, that it emphasizes on simple though satisfying foods rather than variety. In fact, at the same period eating habits were started to be applied with “Fatih Lawbook”. One of those rules was, Sultan did not eat except his own family. Moreover, the staff of the Kushane Kitchen that he belongs were also going with him when he went to reign.

In the following times, the changes in the world also affected Ottoman Empire over time. Especially, French dishes were possible to be appeared in the Ottoman Palace Cuisine influenced by many cultures. French Revolution was the biggest reason of that. French cooks that fled from France refuged to Ottoman and started to cook their own dishes in Ottoman Palace Cuisine. Beef with Marrow Sauce and Bavarua are the samples of that dishes. There is no concept such as “dining room” at Ottoman Palace like West. It has not been widely used till 20th century.

The most remarkable aspect of the Ottoman Palace Cuisine that also affected lots of meal culture, was to create almost an atmosphere of feast. That has been realized over time. Meals made in the 15th century which was the founding and rising period of Ottoman, were few and simple. The most glorious times were experienced in Ottoman Palace Cuisine at the rising period. Expanding lands and Ottoman treasure were the biggest reason of that. The glorious period of the cuisine culture continued in the following years. However, the lands that started to shrink with the 19th century, Ottoman Palace Cuisine gradually lost that magnificent state.